The Romanesque is the art of hundreds of buildings that rose up in all corners of this land coinciding with the birth of the Kingdom of Aragon, a thousand years ago. Half-point arches and thick walls of ashlars topped with canyon or ridge vaults extended across the Camino de Santiago throughout Europe.

Discover the Romanesque in Huesca, amidst unforgettable landscapes. 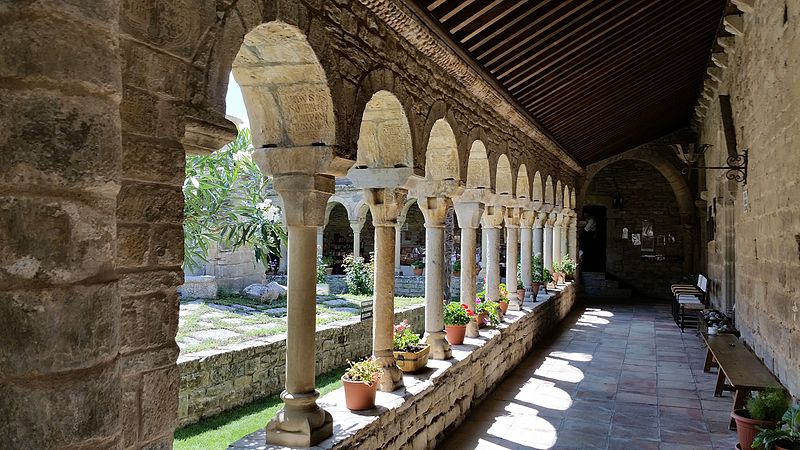 At the foot of Graus, between the mountains of the Isábena Valley, in the middle of the 9th century, the Monastery of Obarra was founded, which became an important spiritual center. Today he fights to keep standing next to the church of Santa Maria (Cathedral of Roda de Isábena), of the purest Lombard style, dating from the first years of the eleventh century. Of basilical plant and three long ships, its horizontality realizes that it is one of the most primitive Romanesque constructions. A few meters away, the hermitage of San Pablo is already of the XII century.

Between Arén and Pont de Suert, in Sopeira, we find the Monastery of Santa María de Alaón founded in the Visigothic era and reformed in the eleventh century. 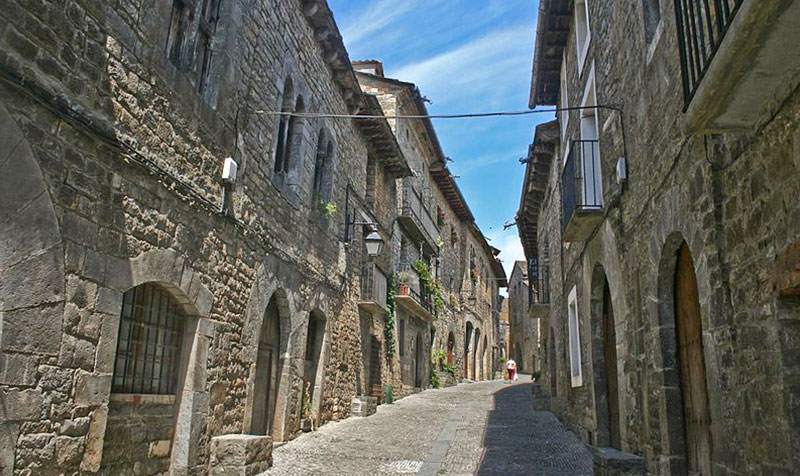 In the heart of Sobrarbe, we find the Medieval Villa of Ainsa. Discover the walled castle, the portal, its streets, paved buildings and the Church of Santa Maria. It dates from the eleventh and twelfth centuries, and its charm lies in a nave with semicircular apse and a large doorway designed with four archivolts supported on as many pairs of columns with carved capitals. Worth noting is the crypt plagued by columns, the triangular cloister and the large square-shaped tower that fulfilled a defensive mission in medieval times. 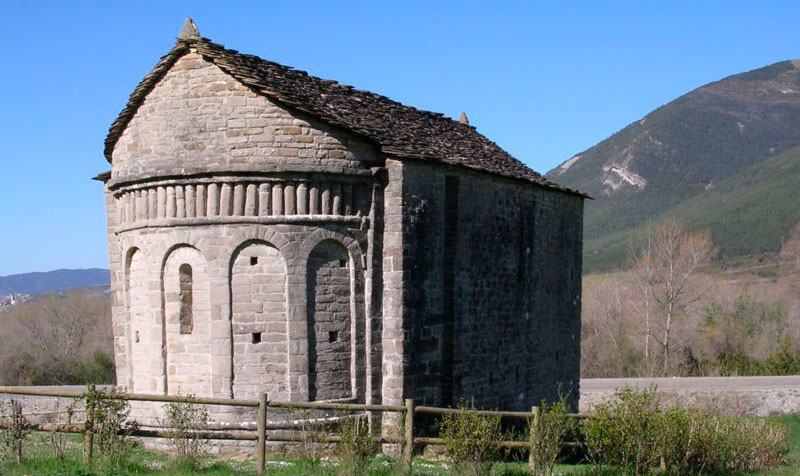 On the left bank of the River Gállego, there is a group of Romanesque churches with Mozarabic dyes built between the middle of the 10th and the 11th century.

Perhaps the most representative example is the one of San Pedro de Lárrede located to 7km. Of Sabiñánigo. Was declared Historic Artistic Monument in 1931.

In Jaca, its cathedral is one of the most important monuments not only of the Aragonese Romanesque, but also of all the Spanish Romanesque. This construction was a reference during the 12th and 13th centuries, becoming a standard of the so-called Romanesque style of the city.
A few kilometers away is Santa Cruz de la Serós. A fairytale village with two Romanesque jewels: the hermitage of San Caprasio and the church of Santa Maria. Nearby is the Monastery of San Juan de la Peña, witness of the birth of the Kingdom of Aragon and the passage of the Holy Grail. It was founded under a huge rock the Benedictines in the ninth century.

In this region we can also visit the Monastery of San Pedro de Siresa and in the Garcipollera Valley we find the Church of Santa María de Iguácel. 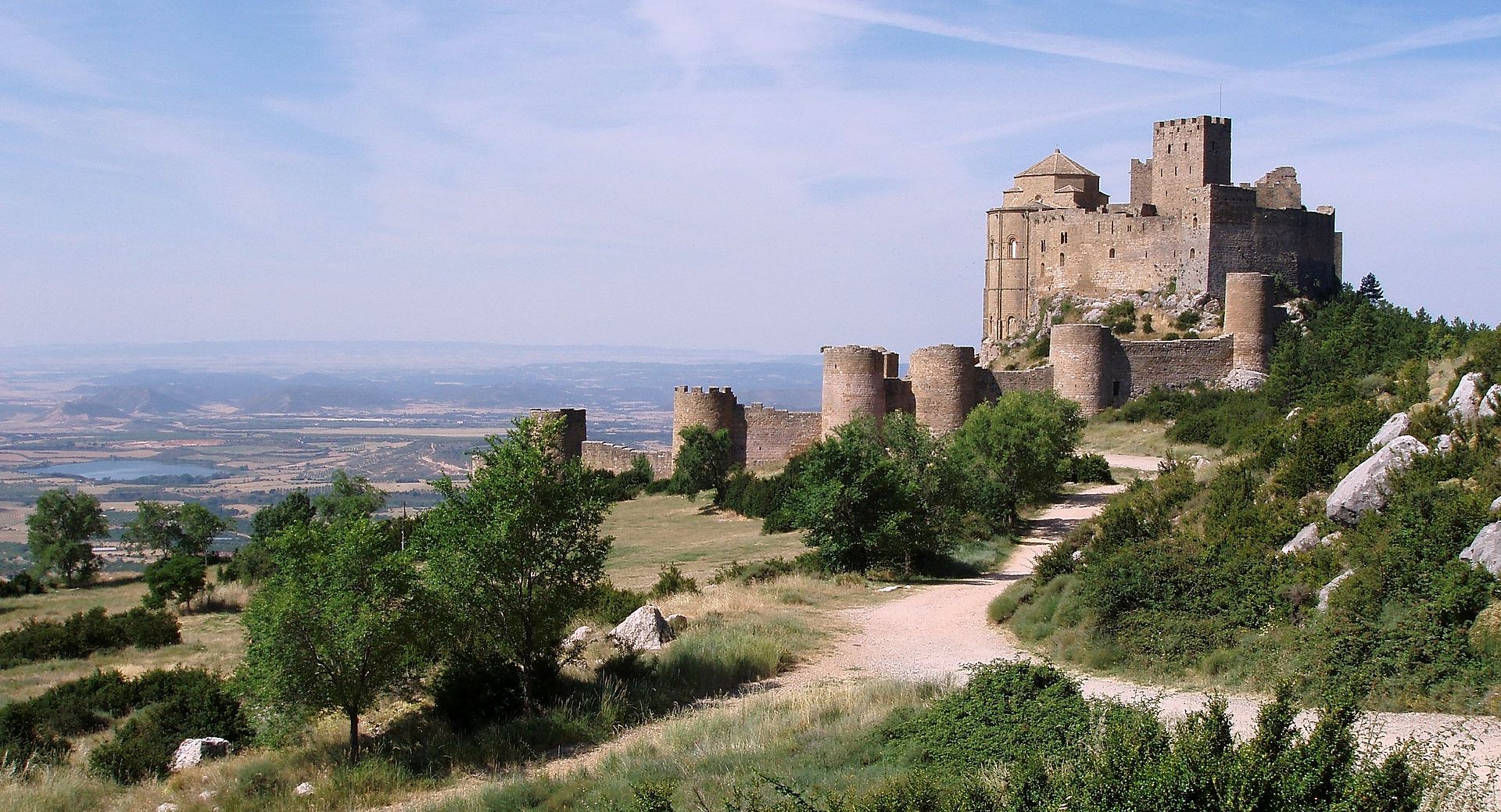 In Huesca, the first visit is to San Pedro el Viejo. It was Roman, Visigoth, Mozarabic and finally Romanesque, remaining as one of the most outstanding examples of this last art in Aragon. It emphasizes its cloister and the chapel of San Bartolomé. The cathedral of Huesca also conserves Romanesque remains as well as the church of San Miguel or the Miguelas. To the outskirts of the city, you can make a stop to visit the hermitage of Santa María de Salas.

About 35 kilometers north of Huesca stands the Castillo de Loarre, the most important Romanesque fortress in Spain, built in the 11th century.

In the region of Somontano de Barbastro, aupada by the cliffs that rise on the river Vero, the Collegiate of Santa Maria next to a haughty castle, dominate the charming Medieval Set of narrow and cobbled streets that is Alquézar.

In the region of the Monegros, the monastery of Sigena, of Romanesque-Gothic style, was built between the XII and XIII centuries to welcome the noble ladies of the time. Today the family of the Monastery is composed of fifty Sisters of Bethlehem who pray, read and work in solitude and silence.

This website uses cookies to improve your experience while you navigate through the website. Out of these cookies, the cookies that are categorized as necessary are stored on your browser as they are essential for the working of basic functionalities of the website. We also use third-party cookies that help us analyze and understand how you use this website. These cookies will be stored in your browser only with your consent. You also have the option to opt-out of these cookies. But opting out of some of these cookies may have an effect on your browsing experience.
Necessary Always Enabled
Necessary cookies are absolutely essential for the website to function properly. This category only includes cookies that ensures basic functionalities and security features of the website. These cookies do not store any personal information.
Non-necessary
Any cookies that may not be particularly necessary for the website to function and is used specifically to collect user personal data via analytics, ads, other embedded contents are termed as non-necessary cookies. It is mandatory to procure user consent prior to running these cookies on your website.
SAVE & ACCEPT